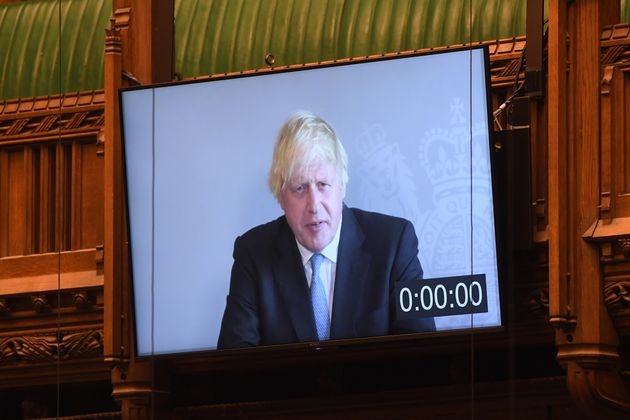 “Do you want me to have another go?” Boris Johnson’s plaintive plea in PMQs was directed at the Speaker, as a Zoom glitch cramped his usually combative style. David Cameron famously once said his Christianity was like “Magic FM in the Chilterns, it comes and goes”, and the PM’s volubility suffered similarly from his remote access to the Commons.

The erratic nature of Johnson’s contributions turned out to be uncannily apt as it matched yet another chaotic day for the government. Keir Starmer was relentless about ministerial mixed messaging on use of the NHS app. He also ridiculed No.10’s failure to define which “critical workers” (clearly the PM wasn’t one of them) would be exempt from being pinged into isolation.

Johnson tried to hit back by stressing that his own forced quarantine in Buckinghamshire just proved how important it was to comply with requests to stay at home, even if not everyone has use of a country home.

But while the PM was playing Chequers, Starmer was playing chess. His attack on Johnson’s WhatsApp messages (joking about leaving the over-80s to die from Covid) prompted the PM to let slip that “we were thinking in those ways” last year - damning admission that is sure to haunt him in any public inquiry.

Starmer also put the opportunist into Opposition, seizing on Tory backbench unease about Johnson’s U-turn over Covid “passports” by ridiculing his previous vow to eat any ID card he was forced to carry. Later, Labour announced it would not support compulsory use of double-jabbed certificates for entry to nightclubs, creating the prospect of a government defeat on any such legislation.

It was perhaps that realisation that prompted the PM to later tell the backbench 1922 Committee that basically his threat on nightclubs was all about jolting the young into getting vaccinated. If enough came forward, he wasn’t ruling out ditching the plan. Playing a game of chicken with the under-30s seems to be where his pandemic policy is right now.

What Johnson didn’t do was read the riot act to those MPs, like Commons leader Jacob Rees-Mogg, who opted not to wear face masks in PMQs. At one point I counted only a quarter of Tory MPs following the Speaker’s clear guidance, and at most just under half. With his backbenches restive over other Covid curbs, that suggested who is really calling the shots right now.

With more non-mask wearers on trains and buses this week despite government “encouragement”, the sight of senior MPs doing the same is yet another corrosive bit of message indiscipline. The bare-faced cheek of both is the public health equivalent of tailgating on the Tube, when fare dodgers ride the slipstream of those who do the right thing. The division and resentment it can breed can only get worse.

The Speaker is likely to be even more unhappy about the farcical way in which the 3% NHS pay rise was non-announced to parliament, before being announced finally in the form of a press release. Labour’s Rosena Allin-Khan, who is a part time A&E doctor, could hardly contain her anger as health minister Helen Whately said the pay rise was merely “considering” the rise.

Perhaps taking to heart the PM’s request to have “another go” at things, the department of health took just three hours to reveal the 3% was indeed happening after all. I understand the reason for the delay was not an admin error or anything to do with the fact that Sajid Javid and Rishi Sunak are themselves isolating. It feels like there was serious tension over where and when the funding might come from.

With non-NHS staff like police and teachers being told their pay was frozen (a tactic perhaps designed to make nurses think their deal was a king’s ransom in comparison), the overall impression was not one of end-of-term good news for key workers who were once clapped for their public service in the pandemic.

And it’s that U-turn, the U-turn in sentiment towards those who helped everyone else over the past year, and the suspicion that a pay rise has been dragged out of him for the NHS and is non-existent for others, that could cause the government serious trouble. The Tories are still ahead in the polls but there’s a sense that the ‘vaccine bounce’ may be coming to its natural end.

The upside of the vaccine programme is it touched nearly everyone. The downside of the ‘pingdemic’ is that it too appears to be touching nearly everyone. Calmer heads in government think the sense of disruption, confusion and chaos can’t last much longer. But as MPs head for the metaphorical beaches this summer, some Tories worry that the PM’s flip flops may linger in the public memory.