French president Emmanuel Macron has told Boris Johnson to “keep his word” and implement the Brexit deal he negotiated to avoid a so-called “sausage war”.

The row over the long-term future of post-Brexit trade in Northern Ireland is overshadowing the G7 summit hosted by the prime minister in Cornwall.

In a series of bilateral meetings on Saturday morning, Macron, German chancellor Angela Merkel, and leading EU figures Ursula von der Leyen and Charles Michel all told the PM to “implement what we agreed on” in the Northern Ireland protocol.

Joe Biden is also thought to have concerns about the UK’s position in the row, with No.10 not ruling out unilaterally suspending checks on goods entering Northern Ireland from Great Britain such as chilled meats. But the US president has so far remained publicly silent on the issue at the summit.

Macron led the charge of EU leaders on Saturday morning, telling Johnson in English that relations between Britain and France could only improve if the PM implemented the deal, including checks on trade.

Johnson in response called for “pragmatism and compromise on all sides”, repeating his call to “minimise the impact [of the protocol] on the day-to-day lives of people in Northern Ireland”, while foreign secretary Dominic Raab told the EU to be less “bloody-minded”. 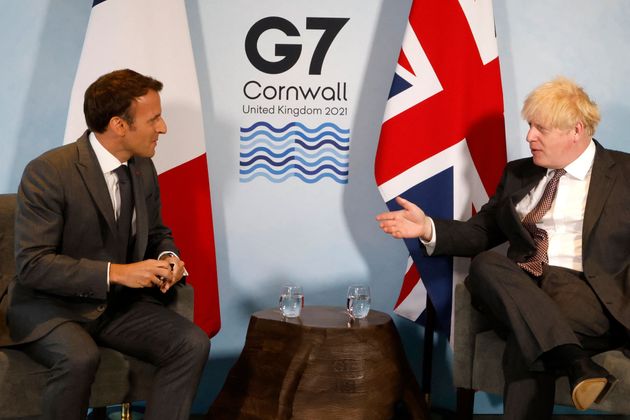 A French source told Reuters: “The president [Macron] told Boris Johnson there needed to be a reset of the Franco-British relationship.

“This can happen provided that he keeps his word with the Europeans.”

Downing Street however rejected that characterisation of the meeting, stressing that Johhnson and Macron agreed they needed to deepen the relationship between Britain and France.

“There was not dependence placed on that linked to the protocol,” the PM’s official spokesperson added.

After meeting Macron, Johnson held talks with Merkel and then von der Leyen and Michel, with all the European leaders raising the Brexit row.

No.10 said none of the EU leaders raised the prospect of imposing retaliatory tariffs on the UK and triggering a so-called “sausage war” if it fails to implement the protocol.

The Good Friday Agreement & peace on the island of Ireland are paramount.

We negotiated a Protocol that preserves this, signed & ratified by 🇬🇧🇪🇺

We want the best possible relations with the UK.

Both sides must implement what we agreed on.

There is complete EU unity on this. pic.twitter.com/SjMVsEaWYA

But von der Leyen said afterwards: “The Good Friday Agreement and peace on the island of Ireland are paramount.

“We negotiated a protocol that preserves this, signed and ratified by [the United Kingdom and the European Union].

“We want the best possible relations with the UK.

“Both sides must implement what we agreed on.

“There is complete EU unity on this.”

The PM’s spokesperson said Johnson was still “currently” committed to finding “radical” solutions within the agreed framework of the protocol, but that the G7 was “not the forum in which he is necessarily seeking to come up with an immediate” fix.

But they stressed that the UK was keeping “all options on the table”, including unilaterally suspending checks on goods entering Northern Ireland from the rest of the UK.

Earlier, Raab told BBC Radio 4’s Today programme: “[The EU] can be more pragmatic about the implementation of the Northern Ireland protocol in a way that is win-win or they can be bloody-minded and purist about it, in which case I am afraid we will not allow the integrity of the UK to be threatened.”

Johnson and Macron also discussed the issue of asylum seekers crossing the English Channel from France to Britain, and discussed “the need for our two countries to work together to find ways to break the operating model of these people smuggling networks and save lives”, No.10 said.

With Merkel, the PM also discussed other foreign policy issues including China and Russia’s “destabilising activity” and the need to increase global vaccine supply.