Earlier this week, you may have seen some paparazzi photos of Little Mix singer Jade Thirlwallletting her hair down after the band’s historic win at this year’s Brit Awards.

Well, Jade has now shared a string of pictures of herself and bandmates Perrie Edwards and Leigh-Anne Pinnock celebrating their win, which saw them becoming the first girlband in history to take home Best British Group.

As well as a couple of somewhat demure shots of herself backstage with Perrie and Leigh-Anne, Jade also shared a rowdy clip of the trio excited leaving the awards show after their win.

In the same post, Jade also revealed a photo of the band celebrating the win with their team, with herself and Leigh-Anne both jokingly holding up their middle fingers to the camera.

It’s been a big week all round for Little Mix, with Perrie announcing that she is pregnant with her first child on Monday, a week after Leigh-Anne also revealed she was expecting.

This was referenced by Brits host Jack Whitehall during the ceremony, when he was heard singing (as part of a sea shanty-inspired sketch): “Soon may the Little Mix come, babies popping out one by one, they still look like they are having fun, Jade’s drinking for all three.”

Jade also poked fun at being the only member of the group who isn’t pregnant with a meme she shared on her Instagram story, quoting a recent interview she gave with People magazine. 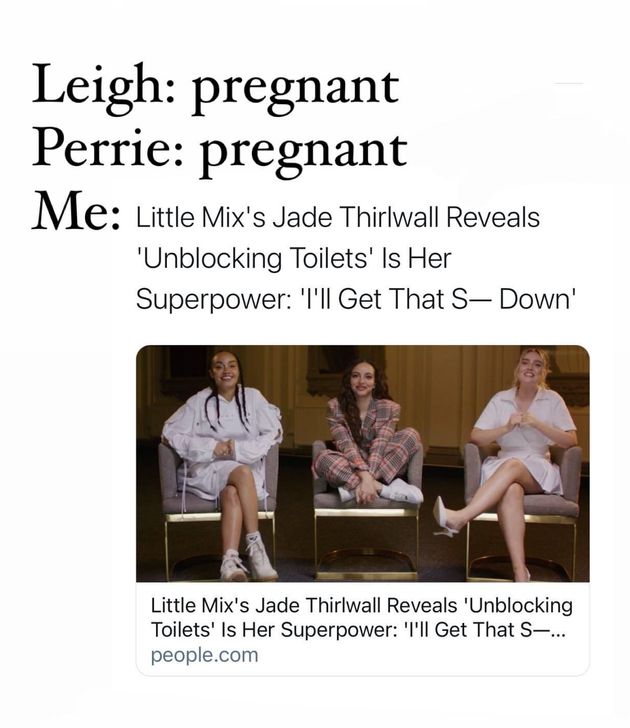