One of the greatest films of all time turns the ripe old age of 10 this week – yes, it’s been a whole decade since the release of Bridesmaids.

And to celebrate, Melissa McCarthy has shared a suitably Bridesmaids tribute to the hit movie.

Referencing perhaps the film’s most infamous scene – where the bridal party get violently ill in a wedding dress shop – Melissa posted a string of behind-the-scenes snaps on Instagram on Friday.

The Oscar-nominated actor, who played sister-of-the-groom Megan in the hit comedy, shared a picture of herself in her bridesmaid dress with fake vomit (or, at least, we’re hoping it was fake) down the front.

Another snap featured the main cast outside the bridal shop, while a third saw Melissa and co-stars Rose Byrne and Wendi McLendon-Covey posing with girlband Wilson Phillips, who had a cameo in the film’s final scene.

Melissa joked: “Who knew the recipe for joy would involve vomit, a carpal tunnel glove and a kangol hat?

“Happy 10 year anniversary Bridesmaids!!! I’d marry you all over again.”

Directed by Paul Feig, the film was co-written by star Kristen Wiig – who played Annie – and Annie Mumolo. 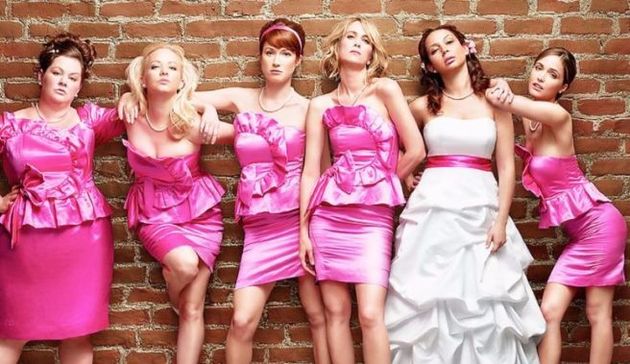 Rumours of a sequel to Bridesmaids surfaced in 2012, and while Kristen Wiig later said she was not working on another script, reports suggested studio bosses were pursuing the idea of going ahead without her.

However, Melissa said she would “never” want to do another film without Kristen, adding at the time: “I think it’s a terrible idea. I don’t know anything about it. But I know that nobody wants to do it unless it’s great. If it is, I will show up wherever those ladies are.”

Relive that bridal shop scene in all its *ahem* glory below...