Former US president Donald Trump’s most recent attempt to get a platform has been thwarted.

On the heels of the launch of his new webpage, “From the Desk of Donald J Trump”, on Wednesday, his team created the handle @DJTDesk on Twitter. 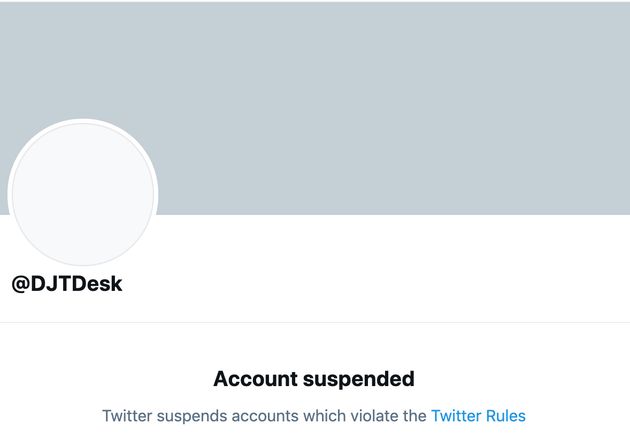 “As stated in our ban evasion policy, we’ll take enforcement action on accounts whose apparent intent is to replace or promote content affiliated with a suspended account,” a spokesperson for Twitter said in a statement.

Trump’s “From the Desk” page is essentially a blog with a timeline format that resembles both Twitter and Facebook’s platforms. In the site’s brief life thus far, Trump has made a series of scattered, combative posts attacking Republicans including Liz Cheney and Mitch McConnell. He also lambasted Twitter, Facebook and Google by name.

“What Facebook, Twitter, and Google have done is a total disgrace and an embarrassment to our Country,” Trump wrote in a post on Wednesday. “Free Speech has been taken away from the President of the United States because the Radical Left Lunatics are afraid of the truth, but the truth will come out anyway, bigger and stronger than ever before. The People of our Country will not stand for it! These corrupt social media companies must pay a political price, and must never again be allowed to destroy and decimate our Electoral Process.”

Both Facebook and Twitter banned Trump from their platforms in the wake of the January 6 insurrection at the US Capitol, which left several people dead.

Twitter penned a blog post about its permanent suspension of Trump, saying it did so “due to the risk of further incitement of violence.”

“In the context of horrific events this week, we made it clear on Wednesday that additional violations of the Twitter Rules would potentially result in this very course of action,” the company wrote. “Our public interest framework exists to enable the public to hear from elected officials and world leaders directly. It is built on a principle that the people have a right to hold power to account in the open.”

Facebook CEO Mark Zuckerbergslammed the insurrection as a demonstration by Trump to “use his remaining time in office to undermine the peaceful and lawful transition of power to his elected successor, Joe Biden”.

“We believe the risks of allowing the President to continue to use our service during this period are simply too great,” Zuckerberg wrote in a Facebook post at the time. “Therefore, we are extending the block we have placed on his Facebook and Instagram accounts indefinitely and for at least the next two weeks until the peaceful transition of power is complete.”

As Facebook’s ban was “indefinite” and not permanent, Facebook’s quasi-independent advisory board said this week that it would be giving the company a six-month window to further review Trump’s suspension, and to “determine and justify a proportionate response that is consistent with the rules that are applied to other users of its platform”.