Boris Johnson has sidestepped a barrage of questions over allegations of racism in the royal family, in the wake of Prince Harry and Meghan Markle’s bombshell interview with Oprah Winfrey.

During a press conference on Monday, the PM spoke only of his “highest admiration” for the Queen and, when pressed over claims made by the couple, said “the right thing for prime ministers to say is nothing”.

The Duke and Duchess of Sussex’s interview on Sunday included a number of explosive revelations.

Meghan revealed a member of the royal family had shared “concerns and conversations” with her husband about how dark the colour of Archie’s skin might be when he was born.

She also said she experienced suicidal thoughts while living as a working Royal, but was denied help from Buckingham Palace.

Pressed a number of times during Monday’s Downing Street press conference, however, Johnson refused to be drawn on the claims made against Buckingham Palace.

He said: “I have always had the highest admiration for the Queen and the unifying role that she plays in our country and across the Commonwealth.”

But on “all other matters to do with the royal family, I have spent a long time now not commenting on royal family matters and I don’t intend to depart from that today”.

Asked a second time, he insisted he would remain silent over the Duchess of Sussex’s suggestion of racism.

Asked whether he believed the royal family was racist, he said: “I really think that when it comes to matters to do with the royal family, the right thing for prime ministers to say is nothing and nothing is the thing that I propose to say today about that particular matter.”

Minutes before he spoke, however, his minister for the Pacific, Zac Goldsmith, hurled criticism at Harry and Meghan on Twitter, claiming the duke was “blowing up his family”.

Not ‘Buckingham Palace’ - Harry’s family. Harry is blowing up his family.
“What Meghan wants, Meghan gets”. https://t.co/2ui5anDvpg

Harry disclosed that his father Prince Charles had “stopped taking his calls” following discussions about his exit from the royal family.

Both alleged that Buckingham Palace failed to protect them from increasingly hostile press coverage of Meghan.

“There have been many opportunities for my family to show some kind of support,” Harry said. “Female members of parliament, Conservative and Labour, called out the colonial undertones of article and headlines written about Meghan. And yet no one from my family ever said anything over those two years.” 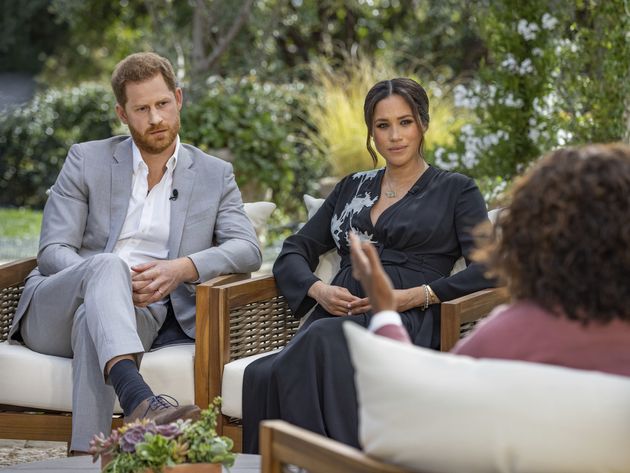 Meghan also denied reports she had made the Duchess of Cambridge cry in the weeks leading up to their wedding.

“The reverse happened,” said Meghan, adding Kate had apologised over a clash between the pair.

Samaritans offers a listening service which is open 24 hours a day, on 116 123 (UK and ROI - this number is FREE to call and will not appear on your phone bill).

Rethink Mental Illness offers practical help through its advice line which can be reached on 0808 801 0525 (Monday to Friday 10am-4pm). More info can be found on rethink.org.