Buckingham Palace has said it is launching an investigation into allegations of bullying made against the Duchess of Sussex by former royal staff.

The palace announced on Wednesday it would “look into” claims made a day earlier in The Times newspaper. A spokesperson for Meghan Markle described the allegations as a “calculated smear campaign”.

The latest developments come just days before Meghan and the Duke of Sussex’s “tell-all” television interview with Oprah Winfrey is due to air, and is expected to lift the lid on the couple’s experiences as working royals before they stepped down for a life in America.

Questions have been raised about the appropriateness of the interview since Harry’s grandfather, the Duke of Edinburgh, 99, has been unwell in hospital for more than two weeks.

Following the palace’s announcement, critics pointed to how there has been no comparable probe into the actions of Prince Andrew, despite the Duke of York facing criticism for his friendship with convicted sex offender Jeffrey Epstein and Ghislaine Maxwell. 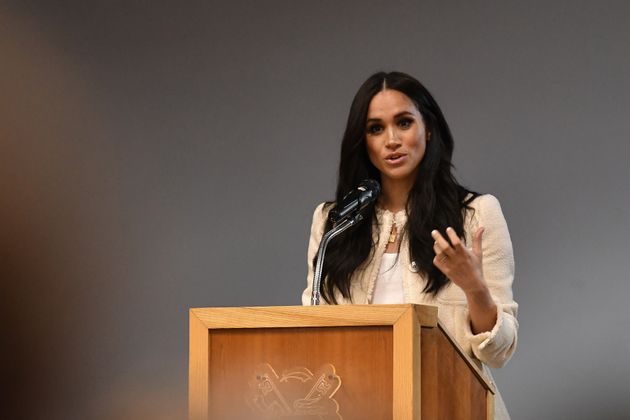 Virginia Roberts Giuffre, a survivor of Epstein’s abuse, has claimed Epstein and Maxwell trafficked her to have sex with Prince Andrew three times when she was 17 in 2001, according court documents filed in Florida. The palace previously issued a statement saying the Duke of York denies the claims made by Roberts Giuffre and “unequivocally regrets” his association with Epstein.

The Times reported allegations that during her time as a working royal, Meghan drove out two personal assistants and staff were “humiliated” on several occasions.

Underlying Meghan’s actions, the paper claims, was the view of a number of sources that she wanted to be a “victim” so her “unbearable experience” would convince Harry they had to leave the UK – something her lawyers have denied.

The monarchy’s “men in grey suits” have been accused of being aware of the alleged actions of the duchess and of doing “absolutely nothing to protect people”.

Buckingham Palace said in a statement: “We are clearly very concerned about allegations in The Times following claims made by former staff of the Duke and Duchess of Sussex.

“Accordingly our HR team will look into the circumstances outlined in the article. Members of staff involved at the time, including those who have left the household, will be invited to participate to see if lessons can be learned.

“The Royal Household has had a Dignity at Work policy in place for a number of years and does not and will not tolerate bullying or harassment in the workplace.”

It is understood the palace hopes to start the investigation soon.

Jason Knauf, the Sussexes’ then communications secretary, made a bullying complaint in October 2018 in an apparent attempt to force Buckingham Palace to protect staff.

A source told the newspaper Harry begged his senior aide not to take the matter further, but it also reported lawyers for the duke and duchess deny the meeting took place and that Harry would not have interfered with staff matters.

Knauf reportedly sent an email outlining the duchess’s alleged actions to Simon Case, the Duke of Cambridge’s then private secretary and now the cabinet secretary, after conversations with Samantha Carruthers, the head of human resources.

The Times reported Knauf wrote in his email: “I am very concerned that the duchess was able to bully two PAs out of the household in the past year. The treatment of X was totally unacceptable.

“The duchess seems intent on always having someone in her sights. She is bullying Y and seeking to undermine her confidence. We have had report after report from people who have witnessed unacceptable behaviour towards Y.”

Melissa Touabti, the second of Meghan’s personal assistants to leave, departed six months after the royal wedding after she ended up in tears, according to reports in a Sunday newspaper.

Lawyers for the duke and duchess said the Sussexes believed staff to be comfortable and happy.

The duchess said “it’s not my job to coddle people”, the Times reported when her alleged treatment of staff was raised by a senior aide at a meeting attended by Harry.

The aide told them staff should be treated well even if they fell below the standards the couple expected.

The newspaper claims a senior adviser – Samantha Cohen, a former assistant private secretary to the Queen – was also targeted.

She worked as a private secretary for the Sussexes after they married and was also allegedly bullied, with a source telling the newspaper “nothing was ever good enough”.

Lawyers for the Sussexes, in a letter to the Times, have said the couple remained close to Cohen and were grateful for her support and dedication, and have denied they bullied her.

Earlier, in response to the allegations in the Times, Meghan’s spokesman said the duchess is “saddened by this latest attack on her character, particularly as someone who has been the target of bullying herself and is deeply committed to supporting those who have experienced pain and trauma.

“Let’s just call this what it is — a calculated smear campaign based on misleading and harmful misinformation,” the spokesperson said, adding they were “disappointed to see this defamatory portrayal of The Duchess of Sussex given credibility by a media outlet”.