Amazon helped itself Friday to the trending photo of a bundled-up senator Bernie Sanders at Joe Biden’s presidential inauguration to sell Amazon Pay – and people were horrified.

The backlash was so immediate that the company deleted the tweet by the end of the day.

The Amazon Pay Twitter account tried to profit from the buzz around the meme of the mittened Sanders sitting by himself in the chilly outdoors at the inauguration Wednesday. In the odd Amazon advert, “How to register for Amazon Pay” is written over the image of Sanders with the tweet: “It’s that easy. Thanks #BernieSandersMittens.”

Not only was the ad confusing, weird and presumptuous, but the choice to use Sanders was particularly fraught because the senator hates Amazon’s labour policies.

In fact, he bashed Amazon in a tweet – on Inauguration Day – for trying to stonewall workers’ efforts to unionise. So he hardly seems like a natural pitchman to boost Amazon’s profits even higher. 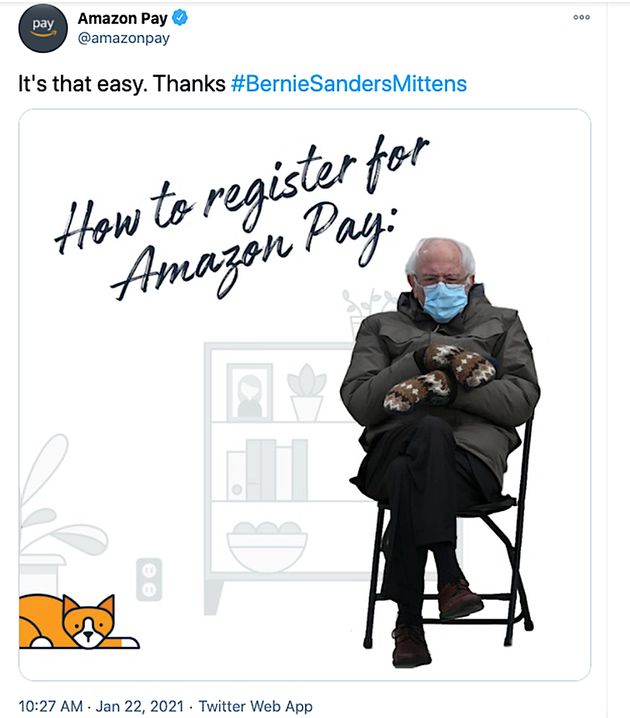 Amazon doesn’t want its workers to form a union because unionized workers have:
- higher wages
- better benefits
- more control over their lives

If Amazon workers in Alabama vote to form a union, that will benefit every worker in America. https://t.co/g2Zfa6DEgc

Jeff Bezos, the wealthiest man alive, became $83 billion richer over the past 9 months while Amazon made record profits. Meanwhile, Amazon workers are risking their lives to fill holiday orders and are denied paid sick leave and hazard pay. This ugly corporate greed must end.

In late December Amazon itself lashed out at Sanders’ criticism of its labour policies and working conditions, so it’s not completely clueless about where the senator stands. Some observers speculated that Amazon was mocking Sanders with the ad.

As of Friday night, Sanders hadn’t directly commented on Amazon’s appropriation of his image to sell its stuff. So his supporters sounded off for him – and let the company have it.

As someone that has lots of bad ideas, I can honestly say this was a really bad idea.

You now owe your workers a union, thank you

sit the fuck down you monopolistic drain on the American dream

Amazon using Bernie's image for marketing reminds me of when Trump held up a Bible while he ordered human rts activists clobbered and gassed.

this is a bad meme and you are a worse company. let workers unionize.

I want a live shot of @SenSanders face when a staffer tells him he’s being used to promote Amazon pay. https://t.co/Vx1GMaCcZz