The UK may not be able to reach herd immunity against coronavirus even if 75% of the population is vaccinated, scientists advising the government have warned.

In a paper modelling the impact of lifting lockdown, the Scientific Advisory Groups for Emergencies (Sage) outlined scenarios showing there could still be tens of thousands of deaths even after tens of millions of people are vaccinated.

The report, published on Friday but written in early December, states the number of deaths is also “critically” dependent on how much vaccines reduce transmission – that is, people passing on the virus to another person even if they are protected from serious illness themselves.

To reach herd immunity, there needs to be “very high” vaccine coverage of the adult population and vaccines would need to be highly effective against transmission.

Even in this scenario, there is a risk that there could be a resurgence of Covid, if we return to pre-pandemic life, which has the potential to force the reimposition of restrictions “to prevent the NHS from being overwhelmed”.

There is consensus that unless vaccines are highly effective against transmission, even coverage of 75% would not be sufficient to avoid further epidemic waves

Sage outlined a scenario in which 75% of the adult population was vaccinated, and the virus was 75% effective at reducing transmission, causing a total reduction in the amount of people passing on the virus of 44%.

“There is consensus that unless vaccines are highly effective against transmission, even coverage of 75% would not be sufficient to avoid further epidemic waves following a post-vaccination return to pre-Covid life.

“Such a resurgence has the potential to require re-imposed restrictions to prevent the NHS from being overwhelmed.”

But despite it being potentially “very difficult” to achieve herd immunity through vaccines and natural immunity acquired from infections in 2020, “this does not mean vaccines cannot provide us with an exit strategy”.

“If we can achieve very high vaccine coverage, particularly in the most vulnerable groups, we would be able to gradually reduce the number of restrictions in place in such a way that the subsequent resurgence in hospitalisations would be considerably smaller than the peaks seen in 2020 and therefore not threaten the NHS,” Sage said.

The paper also outlined several scenarios predicting the number of daily deaths if restrictions are partially eased to levels last seen in early September, when the rules allowed two households of any size to meet indoors or outdoors, or up to six people from different households outdoors.

Deaths remain at low levels if restrictions are only partially eased in April, once 28m people are vaccinated and if the vaccine is at least 25% effective at reducing transmission. 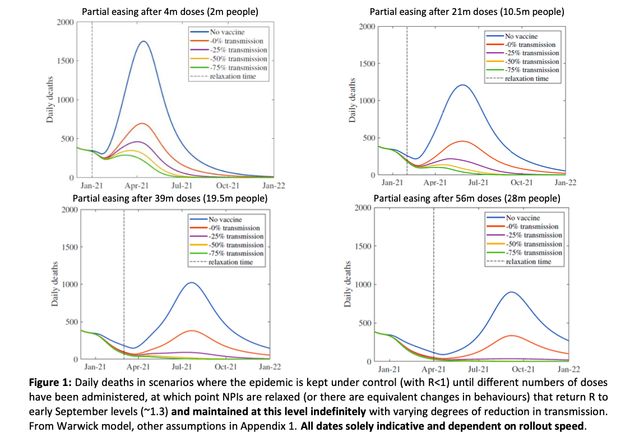 Hospital admissions also remain relatively high unless the vaccine reduces transmission, according to the modelling. 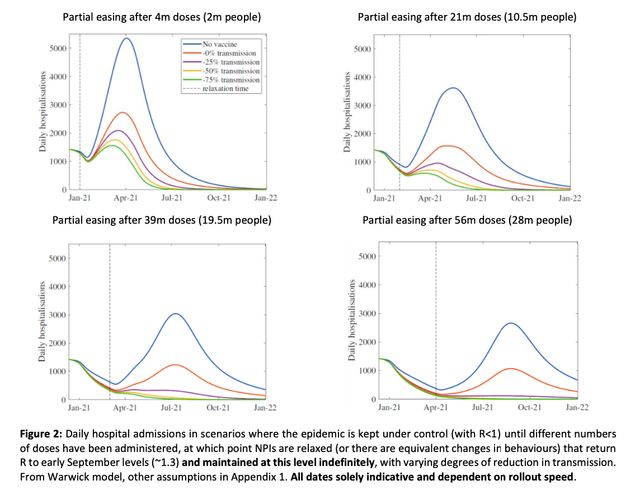 The paper said: “All these simulations assume that the September levels of restrictions are maintained indefinitely, even once deaths return to a low level.

“It is highly unlikely that this would happen in practice, so if restrictions were later lifted further the total death toll in such scenarios is likely to be higher than estimated here.

“If restrictions are gradually lifted before vaccines have sufficiently reduced transmission, then we could see a long plateau with a sustained high death toll.

“The number of additional deaths would depend on both the extent of the easing and policy and behavioural responses following that resurgence.”

England’s chief medical officer Chris Whitty has previously expressed confidence that vaccines are likely to reduce transmission of the virus, potentially providing the key to opening up.