With the world waiting with bated breath for Adele’s musical comeback, one person who’s already had a preview is her BFF Alan Carr.

The comedian has revealed he’s heard a number of tracks from the Hello singer’s upcoming release – and if his review is anything to go by, it sounds like we’re in for a real treat.

Alan was quizzed about the album during a web chat with his RuPaul’s Drag Race UK co-judge Michelle Visage for Grazia magazine. 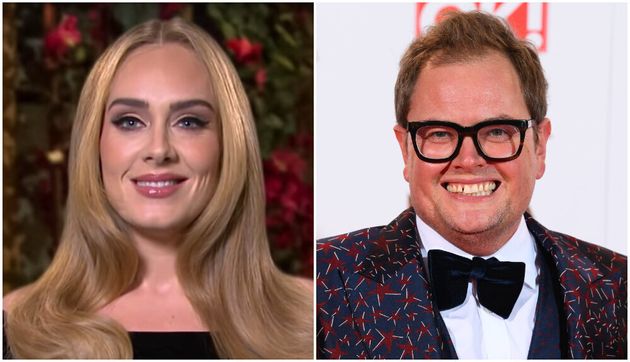 “I’ve actually heard some tracks on it,” Alan revealed. “Oh my god, it’s so amazing. So amazing.

“The thing is – can I just say this – I remember they change all the time because they’re really rough things.”

“Because there are some people in the charts who sound a bit like Adele and you think, ‘Oh they sound like Adele’ and then when you hear Adele’s voice again you go, ’Oh no, there’s only one. There’s only one Adele.”

Michelle asked: “Alan her voice hasn’t gone skinny has it?”

“No, no, no she’s still got a chunky but funky voice don’t worry!” Alan replied.

It had been highly anticipated Adele’s follow up to 2015′s record-breaking 25 would be released in 2020.

However, last year Adele’s manager confirmed it had been pushed back, owing to the pandemic.

In June, Adele also replied to a fan on Instagram who speculated she was about to surprise release the album, commenting: “Of course it’s not. Corona ain’t over. I’m quarantining. Wear a mask and be patient.”

Subsequent rumours have suggested the superstar is preparing to make a musical comeback in February, although nothing has been officially confirmed.

Alan and Adele have been friends for years after meeting at the Brit Awards, and in 2018, she had herself ordained so she could marry Alan and his long-term partner Paul Drayton.

Speaking about how she opened her home to host the ceremony, Alan told This Morning shortly afterwards: “I just want to tell everyone. She won’t say because she’s so private. Flowers, three-course meal, she just planned it all. It was the best day of our life.”

The following year, Alan lifted the lid on his night at Adele’s 30th birthday party, including a rather unfortunate encounter he had with an A-lister after getting “a bit pissed”.