The Last Leg comedian Adam Hills has been widely praised after undergoing a prostate exam on live TV.

The Australian comic was screened for the disease during a Stand Up To Cancer special of the Channel 4 comedy show on Friday night, in a bid to break down stigma and encourage men with symptoms to get themselves checked.

At the end of the show, Adam was invited into a mocked up surgery for a doctor to perform a rectal examination to check his prostate. 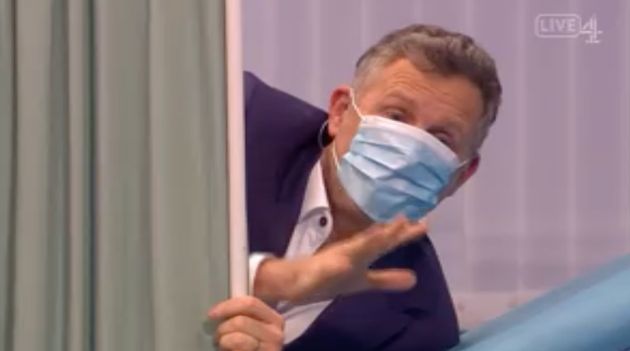 The test was over quickly and painlessly, after which Adam was asked by co-hosts Alex Brooker and Josh Widdicombe how he found it.

“It was slightly uncomfortable, but to be honest, absolutely fine,” he said before turning to the medic and joking: “I’m giving you five stars on Grip Advisor.”

Taking a more serious tone, Adam continued: “Here’s the thing though, we usually end the show on something big and flashy, but the whole point of this exam is to prove to men that it’s actually not a big deal.

“I’ll be honest, it’s a little bit uncomfortable, but not painful. It is not a test you should not worry about if you need to have it. The reality is, it was remarkably straightforward. So, let’s end the show by celebrating that.” 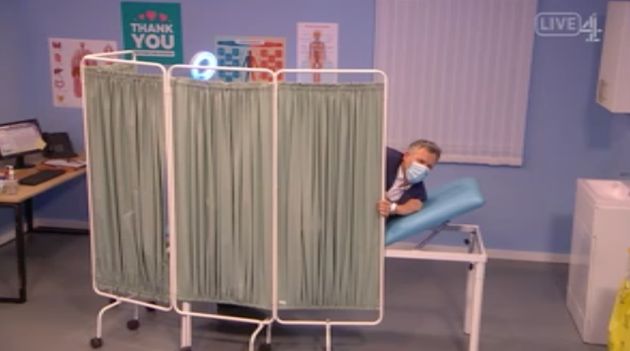 Music then begun playing as a socially-distanced celebration broke out in the studio.

However, Adam got a little carried away while shaking the curtain that was protecting his modesty, accidentally knocking it away and leaving him rushing to cover himself up. 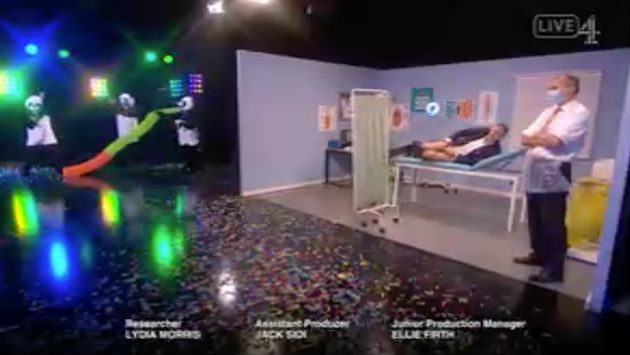 The episode was widely praised on Twitter for helping raise awareness of the disease and for helping break down the taboo some men feel about getting their prostate checked.

#lastleg Adam Hills absolutely brilliant what you did, having your prostate checked on live TV, 10 seconds of discomfort for ease of mind. No brainer. Get checked

@adamhillscomedy Adam just watched last leg 👏🏻👏🏻👏🏻for presenting the last few minutes in the position you did!😳😳😳

Soooo happy to have The Last Leg team back. 👏

Great to see Adam taking one for the team and raising money for cancer research. 👍

I still can’t get over @adamhillscomedy prostate exam live on @TheLastLeg last night. It was the funniest, bravest and most important thing I’ve seen in a long time. Bravo sir.

@adamhillscomedy You are truly incredible, that was an amazing thing you did tonight. I hope my husband will now get checked 🤞
Pleased also on your results.
xx

Joined twitter for the sole purpose of saying well done to @adamhillscomedy. This is likely to be my first, last and only tweet.

Such an important piece of TV. Demonstrates that the arts has real value in our society. Well done to everyone involved 👏👏👏

Hugely impressed seeing this on C4 tonight - so important to highlight how simple this test is. Well done @TheLastLeg and @adamhillscomedy#SU2CUK#StandUpToCancerhttps://t.co/Eh8iRZWER6

.@adamhillscomedy you’re a legend! Thank you for having the prostate examination on TV! My friend’s husband has recently been diagnosed with prostate Ca. #SUTC#TheLastLeg

Fantastic stuff worth staying up for. Hope it encourages people to get checked and see their GP in person if they have concerns. The curtain malfunction was hilarious!

The Last Leg airs Fridays at 10pm on Channel 4.