If you want to pick the brain of Oscar-winning actor Matthew McConaughey about politics and the upcoming US election, put aside a good chunk of your time or consider it a no-go zone.

On Wednesday night, the Hollywood star shut down Australian TV presenter Carrie Bickmore’s question about US president Donald Trump, saying he needed “a longer forum” to answer that to avoid his words being misconstrued.

When Carrie asked “how he felt” about Trump ahead of the November 3 election, the interview on The Project took an awkward turn.

“How do I feel about him?”McConaughey responded. “I want a fuller context and a longer form to talk about that.” 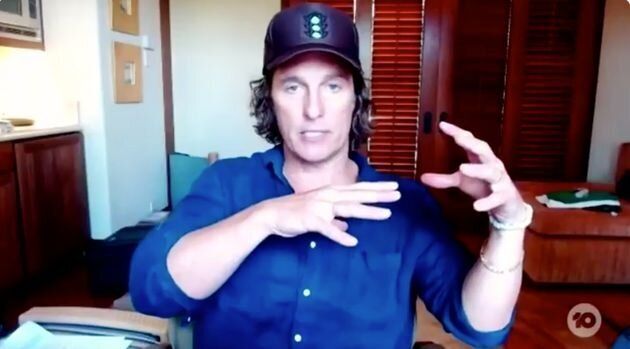 “If I said something to you now, one line could be taken out of context and could be put into a headline, so I don’t want to take the chance for that.

“I need a longer forum where I know it’s word for word [and] everything I’m saying is being broadcast.”

“Well, let’s lock in that chat for another day!” Carrie then responded, looking a little taken aback by his response.

Matthew McConaughey has led an unconventional life. He sat down with Carrie Bickmore and didn't skip a single detail, including being blackmailed at 15, resisting arrest after bongoing naked, and having 78 stitches sewn into his forehead by a vet. pic.twitter.com/yyiEdL81Ij

Though he doesn’t speak much about politics, the 50-year-old answered a question about Trump while promoting his film ‘Gold’ in 2017.

During a recorded sit-down chat with UK’s ChannelFI ― which was later taken down from YouTube ― the interviewer first suggested the film is about “redneck America sticking one up to the snotty East Coast and the elites” before directly asking Matthew for his views on Trump.

“Every single American actor or arty type who comes over to London dumps on Trump. You all completely hate him. Do you think it’s time that maybe Hollywood and the cultural elite of America gave this guy a break?” the interviewer asked the actor.

“They don’t have a choice now. He’s our president,” Matthew responded, before launching into a longer response.