Thank heavens for Dolly Parton, who is ready to fill what’s left of a bizarre year with an abundance of holiday cheer.

The country superstar is a celestial being in the trailer for Netflix’s Christmas on the Square, which puts a female-centric twist on such holiday classics as A Christmas Carol and It’s a Wonderful Life.

Due out November 22, the musical stars Christine Baranski as Regina Fuller, who returns to her hometown after her father’s death.

The miserly Regina plans on evicting all of the town’s residents by Christmas Eve to sell the land off to a developer. Thanks to some divine intervention by way of angel Dolly, however, she experiences a change of heart. Yuletide merriment — punctuated by 14 original songs written by Dolly — ensues.

Directed by Debbie Allen, Christmas on the Square is one of several new projects unveiled by Dolly this autumn.

The film’s title is taken from a track that first appeared on her new holiday album, A Holly Dolly Christmas, featuring collaborations with Miley Cyrus and Jimmy Fallon and released earlier this month. 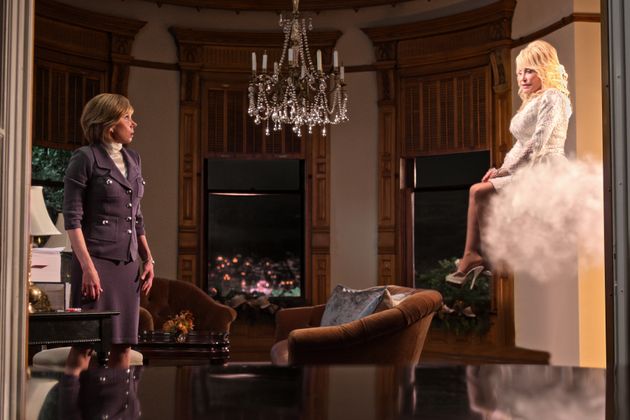 In November, she’ll publish the book Dolly Parton, Songteller: My Life in Lyrics, highlighting 175 of the more than 3,000 songs she’s written.

Appearing on The Late Show With Stephen Colbert earlier this week, Dolly suggested she has turned to music even more than usual to stay grounded amid the tumult of 2020.

“I just feel like I can express myself in ways that I don’t need a doctor for,” she told Stephen. “I don’t have to have therapy. I just sing it all out, write it all out. I can write for other people, too, like you said, because I see things happen to other people, and I think, ‘They don’t know how to express how they feel.’ They’re depressed, or they’re sad, so I write songs for them as well.”

Watch the full trailer for Dolly Parton’s Christmas on the Square above...