The Covid-19 R rate jumped up again on Friday as health secretary Matt Hancock refused to rule out a second national lockdown.

Official estimates by government scientists put the key figure, which shows how quickly the virus is spreading, between 1.1 and 1.4 across the whole of the UK.

An R rate (reproduction rate) above 1.0 means that the coronavirus pandemic is growing rather than shrinking.

The government said: “An R number between 1.1 and 1.4 means that on average every 10 people infected will infect between 11 and 14 other people.”

Last week the R rate was estimated to be between 1.0 and 1.2 across the whole of the UK.

It comes as the government mulls a “circuit breaker” time-limited national lockdown to curb the virus’ spread after the number of positive cases reached almost 4,000 on Wednesday.

On Thursday, the government introduced a curfew on hospitality venues and further social distancing measures in the north-east. New restrictions in areas of the north-west, West Yorkshire and the Midlands also forbid households from mixing in any setting and will come in on Tuesday.

“That is the last line of defence.” 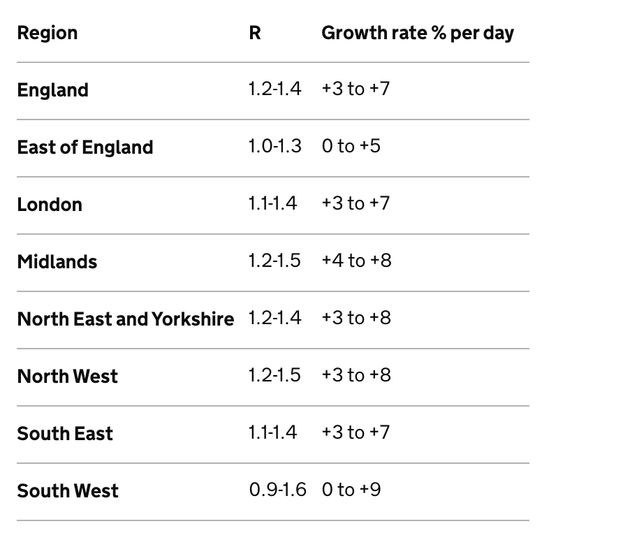 Detailed figures released by the Scientific Pandemic Influenza Group on Modelling (SPI-M), a subgroup of SAGE (the Scientific Advisory Group for Emergencies), on Friday estimate the growth rate of the virus could be as high as 7%.

The group models the R rate and growth rate using a range of data, including infection numbers, hospitalisations and deaths.

While the R rate is thought to be at its highest in the Midlands and north-west, followed by the north-east and London, the growth rate is accelerating the fastest in the south-west.

The Department for Health said the figures do not yet reflect any impact of the new “rule of six” on social gatherings.

The government said: “The higher R is above 1, the faster the epidemic is growing. Doubling times estimates can be estimated from positive growth rates; these suggest that the numbers of new infections have been doubling between every 10 to 20 days.”

Hancock said on Friday that the jump in both rates was likely to mean more deaths.

He said: “We are seeing an acceleration in the number of cases.

“And we are also seeing that the number of people hospitalised with coronavirus is doubling every eight days.

“We are now starting to see the effects in hospital.”