Areas in the north-west, West Yorkshire and the Midlands are the latest parts of the country to see tougher restrictions put in place to control the spread of coronavirus.

In the north-west Lancashire (excluding Blackpool and Greater Manchester), Merseyside, Warrington and Halton have been escalated to areas of intervention, with new restrictions in Wolverhampton, Oadby & Wigston in the Midlands, and parts of Bradford, Kirklees and Calderdale in West Yorkshire.

The local lockdowns forbid households in all areas from mixing in any setting and will come in on Tuesday.

Additionally, in the north-west areas hospitality for food and drink will be restricted to table service and restaurants, pubs, cinemas and other entertainment and leisure venues will be required to close between 10pm to 5am.

Residents in those areas are also asked to only use public transport for essential purposes, such as travelling to school or work and avoid attending amateur and semi-professional sporting events as spectators.

Health secretary Matt Hancock said: “I know these restrictions will make every-day life harder for many, but I know that residents will work together and respect the rules so we can reduce rates of transmission.

“I urge local people to isolate and get a test if you have symptoms, follow the advice of NHS Test and Trace, and always remember ‘hands, face, space’. By sticking to these steps, we will get through this together.”

The restrictions come as rates in Liverpool have increased to 100.6 cases per 100,000 people, with Warrington rising to 111.2, Oadby and Wigston rising to 145.5, and Wolverhampton increasing to 61.8 in the week to September 11.

They follow the introduction of restrictions in the North East on Thursday.

Though expected, the news was not welcomed by everyone in the county.

Neil Shaw, chief executive of Rossendale Borough Council in Lancashire, had earlier called for the government not to impose tighter restrictions.

To be clear, no leader in Rossendale has called for the introduction of tighter restrictions. The Govt may impose these at some point but we are making the case why they shouldn't https://t.co/7Z5YUuMlPW

But Mayor of Liverpool Joe Anderson told BBC Breakfast he welcomed the action in Merseyside. He described it as “unfortunate, but welcome”, adding: “If we don’t tackle the measures now, then we will head towards the winter and Christmas period where we could be in a real difficult position, not just here but across the country.”

In Warrington, public health leaders this week appealed to residents not to visit other households earlier this week as case numbers grew in the borough.

Nine of the 10 areas with the highest infection rates are in the North West.

Most parts of Greater Manchester are already subject to restrictions. 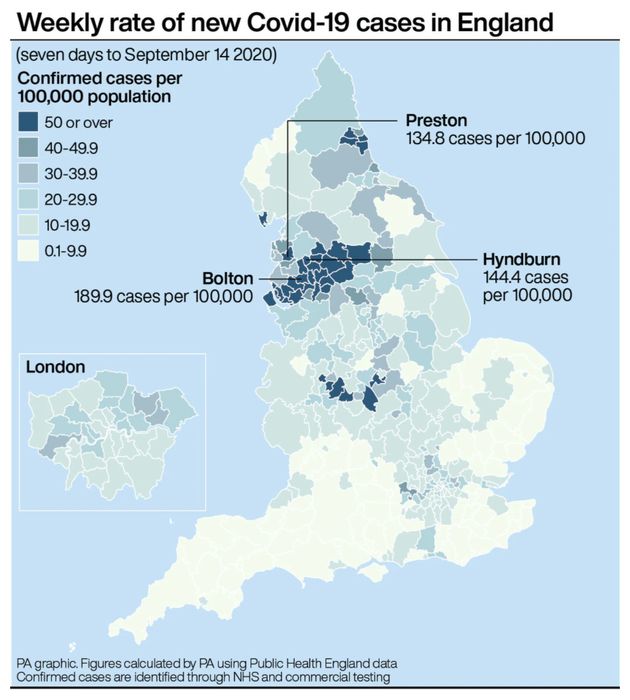 In Bolton, which has the highest number of cases in the country, measures were brought in last week restricting restaurants, cafes, bars and pubs to takeaway only, and requiring all hospitality venues to close between 10pm and 5am.

Before the announcement, it was estimated that around 10 million people in the UK were under local lockdowns - covering parts of Scotland, South Wales, the North West and North East of England, Yorkshire and the Midlands.

A second national lockdown to curb the spread of coronavirus has not been ruled out but the “great hope” is that people will heed current advice to help manage a “very serious” situation, the Health Secretary has said.

Hancock said a national lockdown was the “last line of defence” as he responded to reports that ministers are considering further national measures, even for just a two-week period, such as imposing a curfew on bars and restaurants.