It’s that time of the week again where HuffPost UK takes a look back at which of those in public office treated the truth with as much respect as Kanye West shows a Grammy.

This week was once again dominated by the continuing shambles over the NHS Test and Trace system and features the relatively novel experience of two government ministers saying completely opposite things at almost exactly the same time.

So let us begin.

Priti Patel and Matt Hancock have similar jobs, work for the same Tory party and, you’d imagine, come into contact with each other on an at-least semi-regular basis.

Which is why on Tuesday it was so absolutely confounding that they both acted as if the other had never existed, never mind both be responsible for running large, complex and exceedingly important parts of the same government.

In a series of increasingly painful TV appearances, Patel vigorously defended the government’s test and trace system in the face of mounting criticism and continuing reports of massive failings.

Despite widespread complaints that tests are unavailable, people are waiting more than 24 hours for results or are being forced to travel large distances to get a test, Patel continued to dispute the facts on the ground. 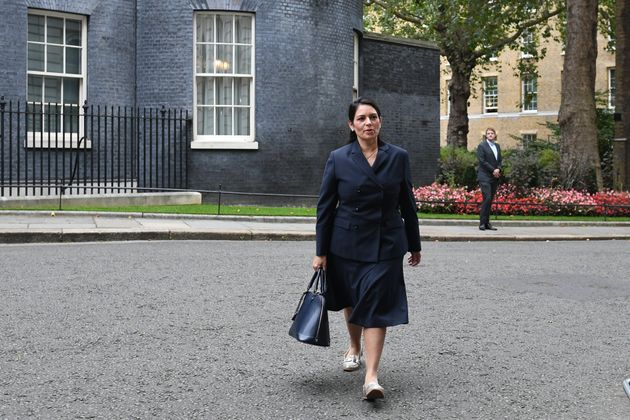 But this was a fib. A MASSIVE fib. And how do we know?

Because just a few hours later Hancock got up in the Commons and admitted tests would have to be rationed due to “operational challenges” and that prioritisation was “a choice that we must make”.

The NHS, sort of

It may shock you to learn that the NHS Test and Trace is a lie. Now, it does exist and it is (with great difficulty and many problems, see above) tracking and tracing coronavirus across the UK.

Thirty-five organisations are listed as “data processors” involved in the NHS Test and Trace system but only four are solely NHS bodies.

A further four are Public Health England bodies, another is the Ministry of Defence and four are “Lighthouse Labs” run by the Department of Health in partnership with a number of other private companies.

The remaining 21 are private companies.

Earlier this week, the British Medical Association joined the revolt against the government’s handling of the crisis, telling HuffPost UK “we don’t have a fit-for-purpose testing system”.

Last week 5 Fibs brought you details of the government’s dubiously monikered Operation Moonshot, the plan to process “literally millions” of tests “every single day”, using new “simple, quick and scalable” tests that could determine whether someone had coronavirus in as little as 20 minutes.

This plan was announced by Boris Johnson.

Boris Johnson said it on live TV in front of everyone.

And yet when asked about this figure at the Commons Liaison Committee on Wednesday, he said: “I don’t recognise the figure that you have just given.”

So it would appear that “literally millions” applies to all figures in the millions except literally ten million. Got that?

It’s often hard to believe that a millionaire who lives in a 17th century castle and named one of his children Sixtus Dominic Boniface Christopher wouldn’t be in touch with the public mood, but once again Jacob Rees-Mogg has proven just that.

Standing in the Commons on Thursday, the Tory MP described the concerns of those who are struggling to get tested for coronavirus amid a nationwide shortage as “endless carping”.

There is a queue at least two miles long to get a Covid test in Sunderland right now. pic.twitter.com/Bna8ifhHYq

Instead, the Tory MP told the Commons on Thursday, people should be celebrating that “our administration” has been able to establish a testing system at all given “we have gone from a disease that nobody knew about a few months ago”.

Hope everyone has a good day. Except Jacob Rees-Mogg. I hope he falls off his penny-farthing.

At around the same time as Rees-Mogg speaking, the latest figures from his administration showed the number of tests completed in 24 hours had plummeted in just a week.

Once again we’re absolutely spoiled for choice over which Trump gem makes into our top five this week, but this one makes it for its sheer audacity and reality-denying chutzpah.

Earlier this week the president denied downplaying the threat of the coronavirus earlier this year – despite the existence of an audio recording of him stating he did just that.

The president participated in a televised town hall meeting on Tuesday with uncommitted voters, hosted by ABC News’ George Stephanopoulos, in a warm up two weeks before he faces Democratic nominee Joe Biden in the first presidential debate.

Taped at the National Constitution Centre in Philadelphia, it featured Trump taking questions from an audience of just 21 voters to comply with state and local coronavirus regulations.

It marked Trump’s first time facing direct questions from voters in months, and an opportunity for the Republican to test-drive his message before the critical debates.

In an exchange with one voter, Trump sought to counter his admission to journalist Bob Woodward that he was deliberately “playing it down” when discussing the threat of Covid-19 to Americans earlier this year.

Despite audio of his comments having been released, Trump told the voter: “Yeah, well, I didn’t downplay it. I actually, in many ways, I up-played it, in terms of action.

“My action was very strong,” he added, according to ABC.