“Never apologise, never explain” is a political credo that is often (wrongly) attributed to Benjamin Disraeli. In the wake of his incendiary remarks about care homes and Covid, self-described One Nation Tory Boris Johnson seems to have adapted at least half of the aphorism.

The backlash over the PM”s remark on Monday – “too many care homes didn’t really follow the procedures in the way that they could have” – was certainly swift and strong today. But instead of expressing any regret, Johnson ordered No.10 to simply clarify his remarks.

Unfortunately, “never apologise, but do try to explain away your blunders” doesn’t quite trip off the tongue. Worse still, it seems to compound the anger. The whole episode has fed the Jeremy Clarkson/Piers Morgan critique of him as an uncaring incompetent.

The PM’s official spokesman was asked repeatedly today if he would say sorry for the remark. Repeatedly, he failed to do so (if you want to see just how a civil servant sticks like superglue to a line-to-take, read my transcript). Instead, we were told that in effect everyone had misinterpreted Johnson’s words.

Here is the full exchange between Lobby journalists and the PM's official spokesman.
Read in all its glory: pic.twitter.com/A77dZRsuFk

What he had been doing was pointing out that “nobody knew the correct procedures to put in place at the time, because the extent of asymptomatic transmission was not known”, the spokesman said. The line was road-tested by business secretary Alok Sharma and renewed later in the Commons by health secretary Matt Hancock.

The big problem of course is that Johnson’s words – the ones that actually left his mouth, as opposed to the ones deployed by his dutiful Downing Street mouthpiece – didn’t mention anything about asymptomatic transmission or “correct” procedures.‌

I had a chat this afternoon with Mark Adams, the care home chief whose withering criticism of the PM went viral after his Today programme appearance on Tuesday. Adams rightly pointed to the logical flaw in the No.10 defence: “If you were saying that nobody knew the rules because they’re asymptomatic, why would you say some have failed [to follow procedures]?”

Adams went further, saying it was a “Trumpian” tactic to claim you’d said something other than what you’d actually said. He also made a wider point, which was that actions speak louder than words, especially on coronavirus. “If they can get the funding sorted out, the testing sorted out, and help us on PPE, they can keep their apology. Obviously if they want to throw that in as well it would be great.”

To the layman, it seems blindingly obvious that the PM should today have expressed some regret for the impact of his words, a mea culpa for the phrasing. After all, appearing to replace his Thursday night “clap for carers” with a Monday lunchtime “slap for carers” was terrible politics on any level.

Surely a heartfelt apology would have defused the row, instead of letting it fester more than 24 hours? Won’t he have to do it in PMQs on Wednesday anyway, or will he assume the public will care more about the Chancellor’s statement?

What’s curious about all this is the sheer political risk the PM is taking with the pensioner vote that backed him in large numbers at the 2019 election. Even if he thinks that low-paid care home staff are not likely to support him, their residents and their relatives really can’t be dismissed. Private care home owners and businesses have also been seen as natural Tory supporters in the past.

So, why the “sorry not sorry” approach? 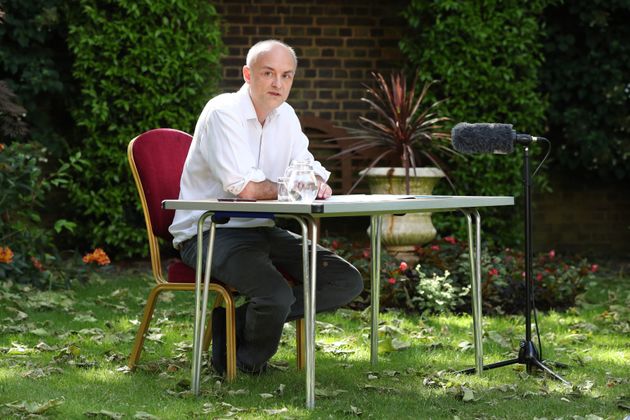 Well, maybe Johnson has seen this Columbia University study. It suggests that when a prominent figure apologises for a controversial statement, the public are either unaffected or become more likely to desire that the public figure be punished. For a PM who has studiously avoided any admission of liability on coronavirus mistakes, in the hope that a public inquiry will spread the blame, that would fit.

And maybe that’s the real explanation. Johnson really does think that too many care homes failed to act responsibly, it’s just that he has blurted it out prematurely. His difficulty is that those care homes that did unilaterally operate their own drastic lockdowns (some told staff to live on site and stay on site) did so despite, not because of, government guidance.

Johnson has apologised in the past for things that he clearly didn’t think were his fault (his trip to Liverpool as Spectator editor was for a leader article he didn’t write, his regret over Islamophobia was for incidents that took place under Theresa May). The bitter irony is that he is now refusing to apologise for something that is nobody’s fault but his.

There is another factor perhaps at work. “Never apologise, partially explain” seems to be the mantra of the PM’s chief adviser, Dominic Cummings. He famously refused to express any regret for his own (triple) breaches of lockdown guidance. It was in that Cummings rose garden press conference that he also planted the first seeds of doubt that others (Public Health England? Sage?) would one day be made to account for errors in the pandemic, whereas he personally had “argued for lockdown”.‌

Johnson still has time. It took him nearly two weeks to apologise for giving the false impression that Nazanin Zaghari-Ratcliffe was working for the UK government in Iran. If he can use PMQs to express his regret, even if that means disowning his own words, he may claw back some understanding for a ‘misspeak’. If he doesn’t, the narrative of a man who always runs away from responsibility is sure to grow.

“They said they thought the car was stolen. That was their excuse. These are the issues the black community are suffering from.”

– Doreen Lawrence reveals she was stopped by police on her way home from studying, soon after her son Stephen’s death.

The OECD warned that one in seven Brits could be unemployed by the end of the year as the world economy struggles to recover from lockdown.

Mel Stride, the Tory chair of the Commons Treasury committee, urged the government to ditch plans to treat coronavirus tests as a taxable benefit in kind.

Rishi Sunak will announce a £2bn plan to give £5,000 energy saving home insulation vouchers to hundreds of thousands of homeowners. The poorest will get up to £10,000.

Tory chairwoman Amanda Milling confirmed the party conference had been cancelled and replaced by a virtual event. “If guidelines allow, we hope we can include some elements of the traditional Party Conference we all know and love,” she told members.

Retail chains ASOS, Next and Zalando have dropped the fast-fashion brand Boohoo amid claims that it has mistreated workers at its UK garment factories.

At least four pubs in England that reopened their doors for the first time on Saturday have been forced to close again after customers or staff tested positive for Covid-19.

Donald Trump’s White House has formally informed Congress the US is withdrawing from the World Health Organisation.

What Happens When Trump Targets You On Twitter - BBC.