Don’t stand so close to me

The English word quarantine stems from the Italian quaranta giorni, the 40 day period that ships were required to sit in port in Venice in a bid to stem the plague infecting the city in the Middle Ages. So when Boris Johnson tried to defend his new 14-day quarantine on all international arrivals to the UK, there was no small irony in him being quizzed on the policy by an Italian journalist.

“What I would say to our Italian friends,” he told the man from RAI at the No.10 press conference, “is...Tutti benevenuti! Come back to London or to the UK. But you’ve got to quarantine. I know it’s an imposition.” In other words: you’re all welcome but you’re not welcome really. Even for a PM famous for wanting to have his panettone and eat it, it was quite a stretch.

Of course, many would have expected a Home Secretary to lead the Downing Street briefing on such a key new Home Office policy. But Priti Patel is so little trusted that she is subject to a media curfew that has seen her appear at the No.10 podium just three times in three months.

Patel couldn’t avoid appearing in the Commons to deliver a statement on her proposal. But there was no hiding place from the backbench Tory criticism of a plan that many of them felt was a needless act of economic self harm, as well as a blow to the post-Brexit message that the UK was ‘open for business’.

The withering criticism from big beasts like Theresa May and Liam Fox were one thing. But what struck me most was the number of new MPs who went public with their unease. Ben Spencer, Jonathan Gullis, Christian Wakeford all proved that perhaps the most damaging thing about the Dominic Cummings affair was the way it has given the 2019 intake a taste for dissent and possible rebellion. No wonder PPS jobs are being handed out to Red Wall loyalists like sweeties.

Patel lived down to expectations on some of the basic facts too. When she wrongly claimed that British nationals would have been stopped from being repatriated if her quarantine had been imposed at the start of the pandemic, one minister told me he held his head in his hands.

Most damaging of all was that Patel effectively confirmed that the plans had not been recommended by the government’s Sage group of scientific advisors. Several times she said “the government have been guided by the science from the outset”, but it became clear she was talking about “representatives of Sage in departments across government”. The Home Office’s chief scientific advisor, Prof John Aston, was cited by No.10 when challenged on the same issue.

The slam-dunk proof came however during the No.10 press conference when chief scientific adviser Sir Patrick Vallance made plain the reality. The Sage advice was that quarantines were “most effective when the number of cases is very low, and they’re most effective when they’re applied to countries from higher rates,” he said. Given that 13 out of the UK’s 15 most popular foreign tourist destinations have an R rate lower than our own, the lack of evidence is dramatic.

Vallance added that the judgement of when to impose such crackdowns was “something for politicians to make”. It’s true that ministers can only be “guided by the science” and not directed by it (some think Vallance was as slow as the PM on lockdown). But Patel’s policy seems guided and directed by her and No.10’s belief that the public want a show of strength on UK borders. 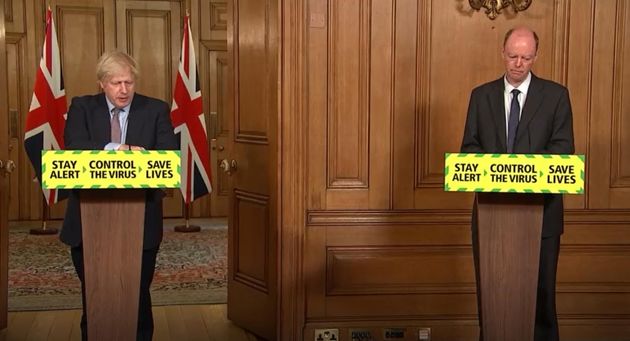 The gulf - you could call it even call it distancing - between the scientists and ministers was however repeatedly stark at the latest briefing. Vallance said the “relatively large numbers” were “still not coming down fast”. On test and trace, Chris Whitty said it will be “quite some time” before the capacity is good enough. All the easings so far were “slight”, he added.

Crucially, on the 2m social distancing rule, Whitty said it was “going to carry on really for as long as this epidemic continues”. And yet within minutes the PM appeared to contradict him, ending the press conference with his hope that “eventually I would like to do things such as reducing the 2m rule”.

The idea of MPs voting remotely seems another area where scientific advice comes second to Johnson’s wish to send a message to the populace. As with quarantine (which polls show has voter backing), he is calculating that he’s on the right side of public opinion, not scientific consensus. Three times in PMQs he used the phrase “the people of this country”, adding “ordinary people are getting used to queuing for long periods to do their shopping” and MPs should put up with some waiting too.‌

That attempt to resurrect the ‘people versus parliament’ narrative of the Brexit wars felt like cover for his own retreat on proxy voting (itself triggered by Tory backbench irritation). But it was also a reminder that Johnson uses PMQs to unveil policies, largely because it is one of the few forums where he is required to surface in public. The new target for a 24 hour turnaround for Covid tests by the end of June was a further example. No.10 also clearly has focus groups and polling suggesting the voters don’t like Keir Starmer sniping from the sidelines.

And yet for all that, Starmer will claim he has pushed the government to change course on everything from testing and PPE to economic support and MPs’ votes. And with new polls showing a new drop in public support for the way Johnson has handled the crisis, he can claim he is capturing the nation’s shifting mood.

The self-isolation tonight of business minister Alok Sharma after sweating at the despatch box, just 24 hours after farcical scenes of MPs’ conga queues on MPs first day back at parliament, underlined the impression of chaos. I’m also told that 100 Tory MPs packed into the 1922 committee meeting today, one chair apart with cursory regard for social distancing.‌

And as one former Labour minister told me this week: “The public don’t expect the Tories to care. They expect the Tories to be able to run things. And we’ve only won power when we’ve shown they are crap at running things.” Douglas-Home, Heath, Major all paved the way for Labour governments. That’s why for Starmer (with Labour still well behind in the polls), competence is all. And why, even this far out from a general election, Boris Johnson is really desperate to reconnect with ‘the people’.

“I am afraid tragically there will be many, many job losses. That is just inevitable.”

Another 359 people have died after contracting coronavirus, bringing the UK total to 39,728. The grim 40,000 milestone may well be reached tomorrow.‌

Commons staff undertook a ‘deep clean’ of the despatch box during a long suspension. The move came after business secretary Alok Sharma was seen sweating during his opening of the second reading debate on the Corporate Insolvency and Governance Bill. He later went into self-isolation.‌

Boris Johnson urged the public not to move gatherings indoors if it rains in coming days, warning that could “undermine and reverse all the progress that we’ve made together”.

Prompted by Keir Starmer, the PM said George Floyd’s death was ‘appalling and inexcusable”. “My message to president Trump is...racism and racist violence has no place in our society”. Johnson said ‘black lives matter’, before adding that protests should be carried out in a “lawful and reasonable way”, with social distancing.

Durham County Council is investigating complaints that the “cottage” Dominic Cummings used during his lockdown trip did not have the correct planning permission and may be liable to council tax.

How US Cops Traded In Racist Memes In 2019- Reveal

Each week, the HuffPost UK Politics team unpack the biggest stories from Westminster and beyond. Search for Commons People wherever you listen to podcasts and subscribe.