Protesters and police came face to face outside Downing Street as thousands of people flooded central London for a Black Lives Matter demonstration in response to the death of George Floyd.

A crowd of demonstrators and officers were involved in brief scuffles, reports suggest, during a stand-off on Wednesday afternoon outside the gates of the prime minister’s residence.

Video posted on social media showed objects being thrown at police and officers scuffling with unidentified people. One reporter at the scene said it happened after police “appeared to take a protester from the crowd”. 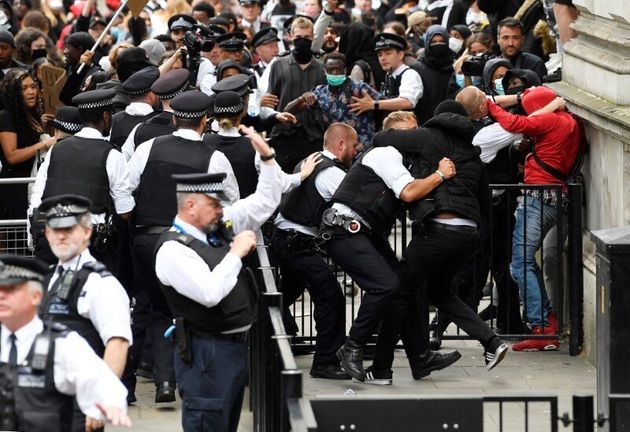 Yards away, Boris Johnson was giving a press briefing on the latest coronavirus updates.

Asked what his message to President Trump on behalf of the protesters outside, he said: “We mourn George Floyd and we are appalled and sickened to him.

“And my message to President Trump and everybody in the United States, from the UK, is I don’t think racism and racist violence has any place in our society.”

He added: “I do think people have a right to protest and make their feelings known about injustices such as what happened to George Floyd and I would urge people to protest peacefully and in accordance with the rules on social distancing.”

Tens of thousands of people are taking part in the demonstration, which has so far been overwhelmingly peaceful.

It's kicking off now. Unclear exactly what started things. Police appeared to attempt to take a man from the crowd and pandemonium ensued pic.twitter.com/6XPGXV2HKt

BREAKING - Crowd confronting police outside the gates of Downing Street. Officer punched in the face, numerous objects being thrown at police now. pic.twitter.com/tJ6ZnXUcv6

Floyd died after a white officer held him down by pressing a knee into his neck in Minneapolis on May 25, sparking days of protest in the US.

At the London event on Wednesday, organisers provided masks and gloves to protesters who were asked to sit two metres apart unless they were from the same household.

Protesters were also told to keep their arms stretched out to ensure social distancing when moving around Hyde Park for the protest.

Protesters remained outside Downing Street chanting as a limited amount of traffic passed down Whitehall. Many climbed on to the window ledges of a neighbouring building as others talked with a line of police outside the gates to the street.

More than a dozen officers were inside the gates watching the protesters.

At one point, police have escorted a man to the side of the road who was bleeding from the head, with blood over his clothes and camera.

Later, a crowd of protesters pushed a line of police into Parliament Square, as bottles were thrown in the direction of officers.

Another crowd then followed a group of officers to outside the Foreign and Commonwealth Office, where protesters shouted “answer for your crimes” and “no justice, no peace”.

Officers formed two lines and rested their batons on their shoulders, shouting “get back” to protesters as they separated the crowds.

The 21-year-old said one of her reasons for protesting was Belly Mujinga, a railway worker who died with Covid-19 after reportedly being spat at by a man who said he was infected with the virus.

British Transport Police launched an investigation into her death but later said it would not be taking any further action.

Thousands of activists, including members of the railway worker’s family, descended on Victoria Station – where Mujinga was working at the time of the spitting incident – holding a sign that read “Justice for Belly Mujinga”.

“I think that is my main reason for this, because she’s black she doesn’t have a voice right now,” Smith said.