It’s been a week since we last saw Boris Johnson, despite hundreds of homes being flooded and a storm over a No.10 advisor who quit after he was found to have advocated eugenics.

The prime minister decamped to his government-owned Chevening mansion for part of the parliamentary recess and has not been seen in public since last Friday’s post-reshuffle cabinet meeting.

Johnson’s submarine strategy during Storm Dennis is in stark contrast to his approach during the December election, when he visited flood victims and convened a meeting of the Cobra government emergency committee.

In the meantime, hundreds of people have been evacuated from their homes in the worst-affected areas following days of flooding. 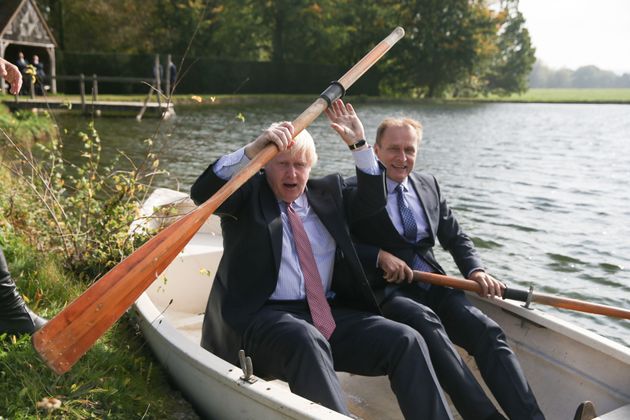 The agency has warned of worsening conditions across the Pennines and parts of Yorkshire, and said that ongoing river flooding remains “probable” for the English-Welsh border around the River Severn for the rest of the week.

Even some of Johnson’s supporters have been pleading for him to visit and help after England was lashed with strong winds and 144% of its average February rainfall.

"I’m a staunch supporter of Boris Johnson... Now I’ve supported him, come on Boris - come and support me."

Ironbridge resident Vic Haddock appeals for the PM to visit the flood-hit community in Shropshire. pic.twitter.com/uV4Z6MQGvX

Labour leader Jeremy Corbyn has looked to capitalise on the PM’s absence, visiting flood victims in south Wales and urging Johnson to “go and talk to them”.

Johnson did not respond, instead sending out environment secretary George Eustice to accuse the Labour leader of “trying to politicise the floods”.

"The Prime Minister has tasked me with leading on this issue."

The Environment Secretary, George Eustice MP says the Prime Minister doesn't need to go to flood hit areas of the UK, because he has been visiting them "on his behalf".

The government has also provided a package of support, including allowing households to apply for up to £500 of hardship payments, as well as council tax and rates relief for three months for “significantly affected” homes and businesses.

Small- to medium-sized businesses are eligible for a grant worth up to £2,500 if they have suffered severe, uninsurable losses, while flood-hit homes and companies can apply for up to £5,000 to make them more resilient.

But despite the announcements, Johnson has not appeared to publicise them, perhaps wanting to avoid a repeat of the scenes when he visited South Yorkshire in November.

WATCH: ‘It’s took you over five days. You should have been there Saturday morning having a meeting... and I’m sorry your announcements yesterday were a pittance.’

Residents in flood-hit Stainforth tell @BorisJohnson what they think of his govt’s response.@itvcalendar | #Floodspic.twitter.com/YDvAOGCJS4

This is the moment furious locals heckle Boris Johnson as he visits a town hit by flooding in Stainforth, Yorkshire. pic.twitter.com/1KMk7nDmfu

"You took your time Boris"

Boris Johnson is criticised by some residents affected by floods on a visit to South Yorkshirehttps://t.co/iqr7npsTFKpic.twitter.com/dmBIwLfrvT

The PM has not been totally silent this week, however, breaking cover to tweet about a phone call with Chinese president Xi Jinping, the government’s points-based post-Brexit immigration system, and the attacks in Hanau, Germany, and at the London Central Mosque.

This morning I spoke to Chinese President Xi to express my sympathy and support for those affected by the coronavirus outbreak. The UK government has donated vital medical equipment to the region and we will continue to offer our assistance. (1/2)

But it comes amid claims that Johnson’s chief of staff Dominic Cummings is set to stop the Commons liaison committee of senior MPs grilling the prime minister.

Johnson has already cancelled appearances before the high-ranking committee twice since becoming PM.

Moreover, he has faced criticism in recent months for dodging an election interview from Andrew Neil and taking days to appear to respond to the US assasination of Iranian general Qassem Soleimani, having taken a holiday to the private Caribbean island of Mustique.

“It is not too late. We have an interview prepared. Oven-ready, as Mr Johnson likes to say”

Andrew Neil issues a challenge for Boris Johnson to commit to an interview with him, to face questions on why people have “deemed him to be untrustworthy”https://t.co/daHLxEYn4rpic.twitter.com/oQ21uDdtJe

HuffPost UK has asked Downing Street to say where Johnson is and what he is doing.

“I could say I’ve also been to Amsterdam”

Lisa Nandy when asked if she has ever has ever taken drugs.

Sadiq Khan has ruled out backing Left-winger Rebecca Long-Bailey for the Labour leadership. In an interview with the Evening Standard, the London mayor said he would “decide over the course of the next few days” between Keir Starmer and Lisa Nandy.

Nandy has told Labour List that she has been “surprised” at the “level of misogyny” she and Long-Bailey have faced during the campaign.